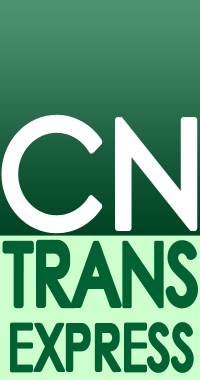 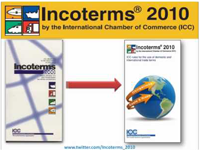 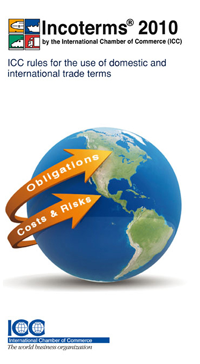 The eighth published set of pre-defined terms, Incoterms 2010 defines 11 rules, reducing the 13 used in Incoterms 2000 by introducing two new rules ("Delivered at Terminal", DAT; "Delivered at Place", DAP) that replace four rules of the prior version ("Delivered at Frontier", DAF; "Delivered Ex Ship", DES; "Delivered Ex Quay", DEQ; "Delivered Duty Unpaid", DDU).In the prior version, the rules were divided into four categories, but the 11 pre-defined terms of Incoterms 2010 are subdivided into two categories based only on method of delivery. The larger group of seven rules applies regardless of the method of transport, with the smaller group of four being applicable only to sales that solely involve transportation over water.

Any mode of transport

The 7 rules defined by Incoterms 2010 for any mode(s) of transportation are:

The seller makes the goods available at his/her premises. The buyer is responsible for uploading. This term places the maximum obligation on the buyer and minimum obligations on the seller. The Ex Works term is often used when making an initial quotation for the sale of goods without any costs included. EXW means that a seller has the goods ready for collection at his premises (works, factory, warehouse, plant) on the date agreed upon. The buyer pays all transportation costs and also bears the risks for bringing the goods to their final destination. The seller does not load the goods on collecting vehicles and doesn't clear them for export. If the seller does load the goods, he does so at buyer's risk and cost. If parties wish seller to be responsible for the loading of the goods on departure and to bear the risk and all costs of such loading, this must be made clear by adding explicit wording to this effect in the contract of sale..

The seller delivers goods, cleared for export, to the buyer-designated carrier at a named location. This is used for any mode of transport. The seller must load goods onto the buyer's carrier. The key document signifying transfer of responsibility is receipt by carrier to exporter.

The seller pays for carriage. Risk transfers to buyer upon handling goods over to the first carrier at place of shipment in the country of export.

This term is used for all kind of shipments.

CIP – Carriage and Insurance Paid to (named place of destination)

The containerized transport/multimodal equivalent of CIF. Seller pays for carriage and insurance to the named destination point, but risk passes when the goods are handed over to the first carrier.

Seller pays for carriage to the terminal, except for costs related to import clearance, and assumes all risks up to the point that the goods are unloaded at the terminal.

Seller pays for carriage to the named place, except for costs related to import clearance, and assumes all risks prior to the point that the goods are ready for unloading by the buyer.

Seller is responsible for delivering the goods to the named place in the country of the buyer, and pays all costs in bringing the goods to the destination including import duties and taxes. The seller is not responsible for unloading. This term is often used in place of the non-Incoterm "Free In Store (FIS)". This term places the maximum obligations on the seller and minimum obligations on the buyer.

The four rules defined by Incoterms 2010 for international trade where transportation is entirely conducted by water are:

The seller must place the goods alongside the ship at the named port. The seller must clear the goods for export. Suitable only for maritime transport but NOT for multimodal sea transport incontainers (see Incoterms 2010, ICC publication 715). This term is typically used for heavy-lift or bulk cargo.

FOB – Free on Board (named port of shipment)

The seller must load the goods on board of the vessel by the buyer. Cost and risk are divided when the goods are actually on board of the vessel. The seller must clear the goods for export. The term is applicable for maritime and inland waterway transport only but NOT for multimodal sea transport in containers (see Incoterms 2010, ICC publication 715). The buyer must instruct the seller the details of the vessel and the port where the goods are to be loaded, and there is no reference to, or provision for, the use of a carrier or forwarder. This term has been greatly misused over the last three decades ever since Incoterms 1980 explained that FCA should be used for container shipments.

Seller must pay the costs and freight to bring the goods to the port of destination. However, risk is transferred to the buyer once the goods are loaded on the vessel. Insurance for the goods is NOTincluded. This term is formerly known as CNF (C&F). Maritime transport only.

Exactly the same as CFR except that the seller must in addition procure and pay for the insurance. Maritime transport only.

Allocations of costs buyer/seller according to Incoterms 2010

Where goods are delivered ex ship, the passing of risk does not occur until the ship has arrived at the named port of destination and the goods made available for unloading to the buyer. The seller pays the same freight and insurance costs as he would under a CIF arrangement. Unlike CFR and CIF terms, the seller has agreed to bear not just cost, but also Risk and Title up to the arrival of the vessel at the named port. Costs for unloading the goods and any duties, taxes, etc. are for the Buyer. A commonly used term in shipping bulk commodities, such as coal, grain, dry chemicals; and where the seller either owns or has chartered, their own vessel.

This is similar to DES, but the passing of risk does not occur until the goods have been unloaded at the port of discharge.

This term means that the seller delivers the goods to the buyer to the named place of destination in the contract of sale. A transaction in international trade where the seller is responsible for making a safe delivery of goods to a named destination, paying all transportation expenses but not the duty. The seller bears the risks and costs associated with supplying the goods to the delivery location, where the buyer becomes responsible for paying the duty and other customs clearing expenses. 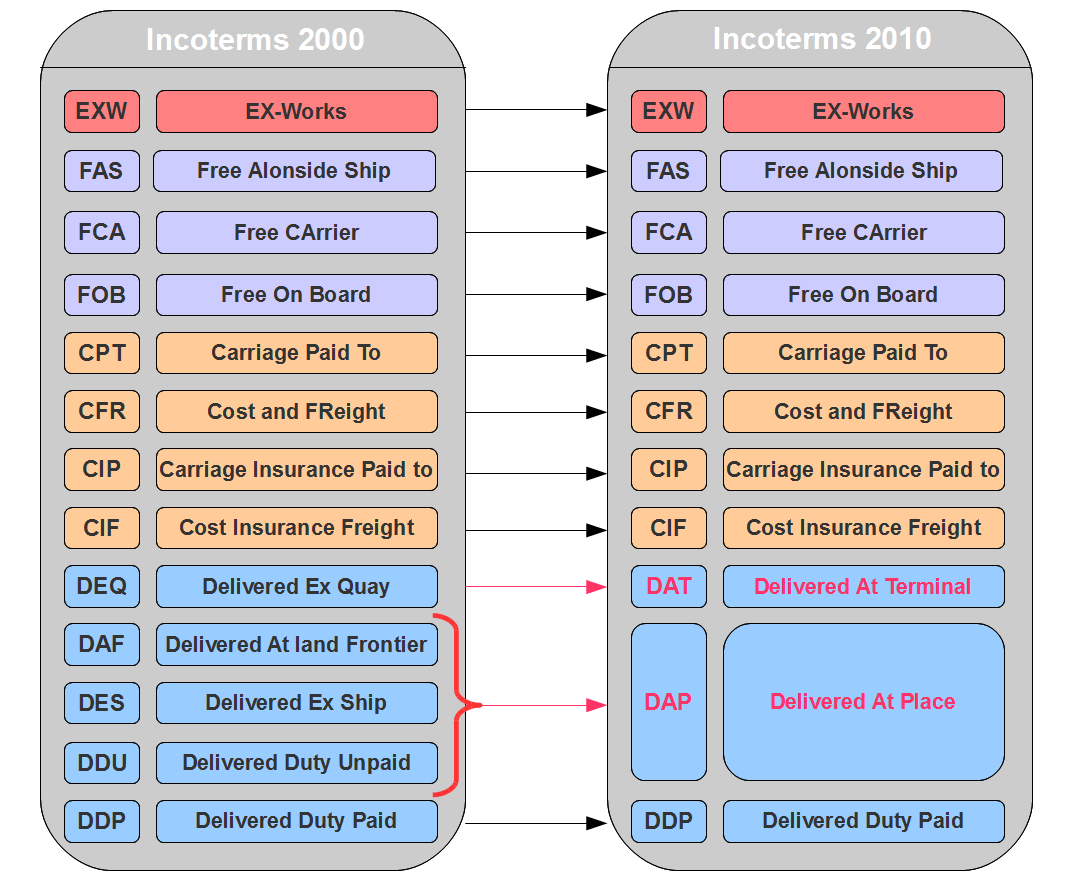 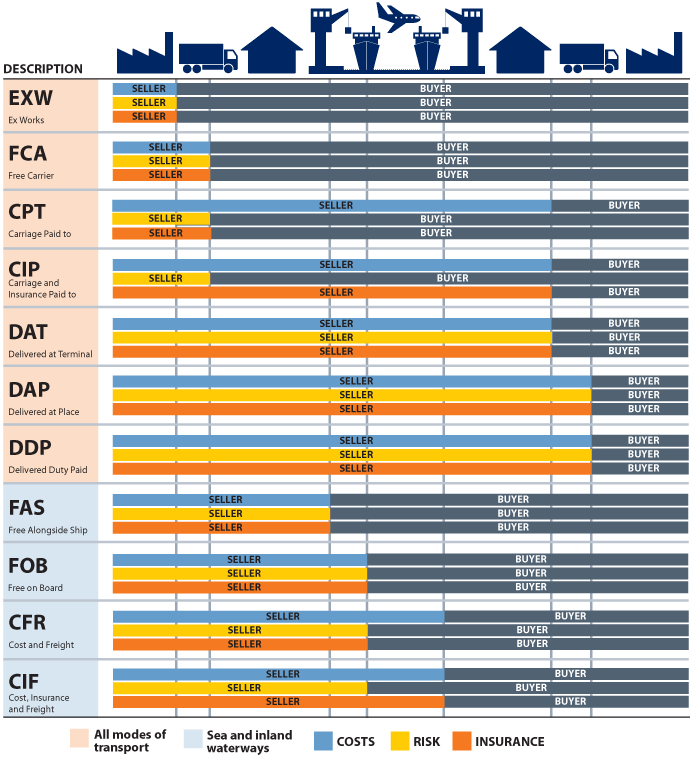